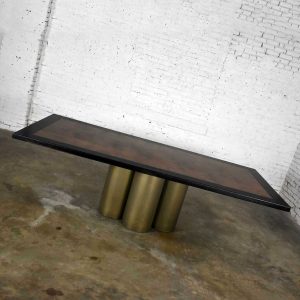 One cannot think well, love well, or sleep well…if one has not dined well. -Virginia Woolf. Well, all the above are about to happen after you gather and dine at this absolutely fabulous modern dining table in the style of Pace. First, let’s talk about the pedestal base…it is comprised of a group of four metal cylinders with a brass looking finish. The patina on this base is spectacular…it has distressed, aged areas and we feel it is what gives it a distinctive appearance. The tabletop is composed of a beautiful black dyed oak frame with an aged brass insert. It is simply stunning. This dining table will look fabulous in your modern or post-modern style dining room and dining chair options are endless! It could also be used as an office conference table. We are completely enamored with this four-cylinder pedestal dining table and surely you must be too! You need to make it yours!! 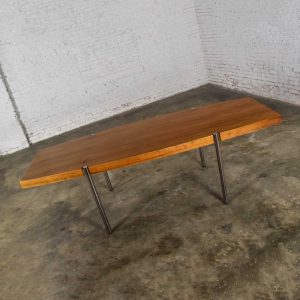 MY, OH MY!!!! This table will almost take your breath away!! Just stunning!! This modern boat shaped table by the iconic Jens Risom for Howe Furniture will certainly make your dining experience much more prestigious and demand attention when in conference! The table is comprised of sultry walnut veneer and four chrome cylinder shaped legs that are inserted into the tabletop. The metal framework below the legs is easily removeable for shipping and appropriate tool is included. It’s a unique, simple, yet stunning design that only Jens Risom could create. It will couple nicely with any style dining chairs or conference room seating.

Howe Furniture was founded in 1928 in Connecticut by Harald Howe. Inspired by the early Bauhaus movement, and the principle of form following function, Howe started making just about any furniture that was simple and flexible. Tables, wooden hat racks, etc. Harald Howe laid the foundation for a strong, international, architect-led brand that would become well-known in Europe and the United States throughout the 20th century and still today.

Jens Risoms career spans nearly sixty years. He began his study of design in 1935 at the Copenhagen workshop in Kaare Klint and joined Ernst Kuhn’s architectural office in 1938, where he designed furniture and interiors. In 1939 Risom emigrated to the United States and in 1941 he designed the first chair manufactured by Knoll. He continued to create simple, well-crafted modern furniture with Knoll and George Jenson but eventually in 1946, established his own studio, Jens Risom Design. In 1973, Risom opened a new firm called Design Control whose clients include Howe Furniture Company and Gaylord. Now in his eighties his work continues to reflect the Danish approach to modernism and values the human need for beauty, warmth, and simplicity.

We know you love this gorgeous table as much as we do, make it yours!! 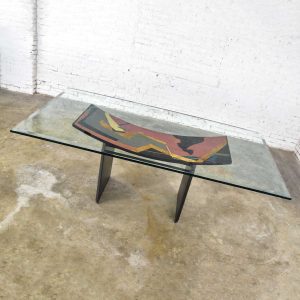 This table is absolutely MAGNIFICO!!!! Signed by the iconic Pietro Costantini, this gorgeous Postmodern Italian dining table is the epitome of fine and eclectic furniture. This dining table is very similar to styles that Pietro Costantini designed for Ello, and though this table is definitely signed by Costantini, we cannot confirm it has been imported by Ello. Either way, it is breathtaking! The base consists of two straight black lacquered panels holding a concave curved rectangular top that is lacquered black on the bottom and the inside top has a lacquered veneer inlay with abstract geometric designs in colors of gold, green, red, blue, and yellow.  STUNNING! This fabulous base holds a 3/4-inch rectangle glass with a 1 ½-inch bevel. Obviously, this would make a gorgeous dining room table anywhere, but we can also imagine it as a dynamic executive desk. And we know it will be a showstopper when paired with beautiful contemporary chairs but just think how incredible and unexpected with a fabulous set of antique chairs! The ideas and combinations are endless. You must make it yours. 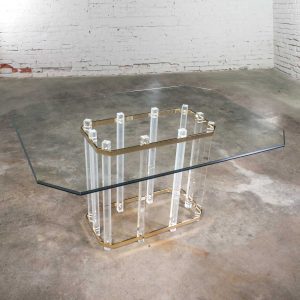 This dining table is ABSOLUTELY WONDERFUL!! We have seen this gorgeous dining table often attributed to Charles Hollis Jones and we researched up and down but have found no substantiating documentation to lock down that fact. What we do know for sure is that it is definitely in the style of his mastery work with glass and Lucite. It is stunning. The base consists of ten upright square solid Lucite pillars that are wrapped in two polished brass plate bars. This solid, beautiful base supports a large, beveled glass rectangular top with carved, polished edges and angled corners that closely mirrors the shape of the base. Both Hollywood Regency and modern in style this table will be the awe factor in your dining room. It is elegant, sophisticated, and in the style of a master creator and designer! You need this fabulous table to be yours!! 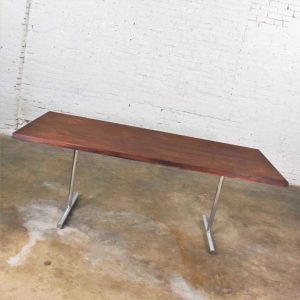 What an iconic mid-century modern Swiss designed dining table! It is attributed as the brainchild of Hans Eichenberger in the 1960s, produced by Haussmann & Haussmann, and distributed in the U.S. by Stendig. The base, which was produced by Ernst Ries & Sohn and retains its label, is comprised of chromed thick tubular steel sled legs. And the top is made of composite wood and rosewood veneer. At some point in its life the tabletop has had a veneer repair that leaves a small diagonal line across its surface at one corner. To me this repair is both endearing and intriguing and does not take away from the table’s overall beauty. I can only imagine the circumstances requiring the repair and the stories it could tell. This iconic table will be a demanding presence wherever it is used.

Hans Eichenbrger was born in 1926 and is a furniture and interior designer based in Herrenschwanden, near Bern. The early 1950s, after training as a carpenter, took him to Paris where he was part of a dynamic cultural milieu that impacted his life and career significantly; and when he returned to Switzerland he began his undeniable impact on 20th century Swiss design history. He collaborated with Trix and Robert Haussmann, Kurt Thut, teo jakob, and Alfred Hablutzel under the name of Swiss Design, as well as Atelier 5. These collaborations and his design projects for Swiss National Bank, the Kunstmuseum Bern, and the SBB are linked to the making of modern Switzerland. His work is included in the collection of the Museum of Modern Art, New York, the Vitra Design Museum, Weil am Rhein, and the Museum fur Gestaltung Zurich. He won many awards and influenced designers in multiple generations and is still going strong.

Stendig was totally the brainchild and passion of Charles W. Stendig. You cannot write or talk about Stendig without explaining Charles. He was a pioneer of import goods in the mid-century. After serving in WWII as a paratrooper, he studied business with emphasis on international trade at NYU and City College of New York. Afterward first working for Raymor, another pioneering distribution company, for about two years, departing to start his own business: Stendig. He opened his first showroom in 1956 in midtown Manhattan. He is credited for sparking America’s interest in furniture from Finland, Switzerland, Italy, and Czechoslovakia. He imported from the likes of Thonet, Asko, and De Sede; and from iconic designers including Le Corbusier, Josef Hoffmann, Eero Aarnio, Tapio Wirkkala, Marcel Breuer, Jonathan De Pas, Donato D’Urbino, Paolo Lomazzi, Carlo Mollino, Carlo Scarpa, and Pier Giacomo Castiglioni to name just a few. By the late 1960’s, Stendig had showrooms in Chicago, Los Angeles and San Francisco with a large headquarters in NYC. They were exciting and good times but short lived. The business was a challenge and when an offer was made by Burlington Industries to purchase, Charles agreed. He stayed on till 1976 to oversee and then retired. I have searched the internet to no avail to find out if a Stendig division is still in operation. But I can only find the Stendig Calendar, the only calendar in MoMA’s collection, which was designed for Stendig by Mossimo Vignelli, still offered. But I am having a hard time deciding who is creating and offering it. I do know Burlington Industries was bankrupt by 2001, purchased in 2003, merged with Cone Mills in 2004 and subsequently into ITG or International Textile Group. But the Stendig name reins as an icon of high style mid-century offerings.