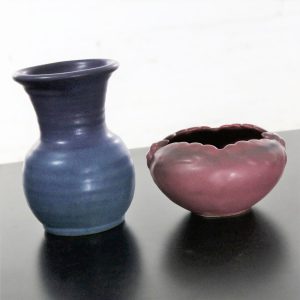 These two pieces of Van Briggle Pottery display well together so we are offering them as a pair. One, the oldest, is their Acorn and Oak Leaves shape number 670 rose bowl. Through research and its markings, we have determined this bowl to be in the Persian Rose glaze making it circa 1940s-1960s. The Persian Rose glaze was introduced mid 1940s and the Roman numeral II that is ink marked on the bottom of the piece is known to be by a glazer from the 1940s-1960s. There is a bit of cross-over here date-wise with glaze color and glazer, so it is possible the glaze could be Mulberry; however, we do feel it is closer in tone to Persian Rose. The second piece is a hand thrown vase by Roland Wick in what we believe to be the Lilac Blue glaze color introduced in 1999, so is most likely circa 1999 to 2012 when Van Briggle closed its doors. This vase comes with documentation from Van Briggle Pottery giving the potters name, whose initials are incised on the vase itself.

Van Briggle Pottery was founded in Colorado Springs, Colorado circa 1901 (some say 1899) by Artus and Anne Van Briggle. Artus was an accomplished painter and had studied abroad while working for Rookwood Pottery. It was there he garnered an appreciation for the Art Nouveau styles and the Oriental matt glazes which he incorporated into his style and techniques established for Van Briggle Pottery. Thus, making them a fundamental force in American Art Pottery and the Arts and Craft movement. In1904, after only three years at the helm of Van Briggle, Artus died from tuberculosis at the young age of 35. But the designs and glazes he produced in those three years carried the pottery into the 21st century. After his death Anne continued their work until 1912. For many, many years Van Briggle Pottery was a mainstay for tourists visiting Colorado Springs. They toured the workshop and bought souvenir treasures which spread Van Briggle pieces throughout the world. Van Briggle finally closed their doors for good in 2012, 111 years after opening.

You could own this pair of gorgeous examples of Artus and Anne Van Briggle’s artistry. Make them yours.