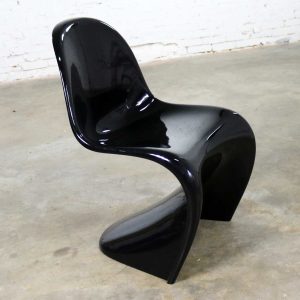 This. This iconic mid-century modern chair. Originally designed in 1956 and first produced in 1965. Hailed as the first chair to be made completely in one piece without legs. It has gone through many material transitions from polyester strengthened with fiberglass to thermoplastic polystyrene which led to Baydur, a high-resilience polyurethane foam which was varnished. In 1968 these last two versions began serial production and were sold by Herman Miller. But the polyurethane was not sufficiently durable, and the chairs began looking shabby over time, so production of the chair was halted in 1979 until 4 years later when the Panton Chair Classic began being produced in a more durable polyurethane structural foam. It wasn’t until 1999 that a less expensive and durable chair began production using polypropylene. This Panton Chair Classic will look fabulous where you decide to use it.

Verner Panton, who wrote design history with his Panton Chair, was born in Gamtofte, Denmark in 1926. He planned to be a painter but at his parent’s persuasion attended the Technical University of Odense to study architecture. Soon he moved on to the Royal Academy of the Arts, Copenhagen where he studied until 1951. His first professional employment was with Arne Jacobsen’s design studio from 1950 to 1952. He is reported as saying he learned more from Jacobsen than anyone else. However, Panton went his own way and founded his own independent studio in 1955. Always having a passion for bright  colors Panton designed an extensive collection of textile designs. Panton is known to say, “Color is more important than form” and “One sits more comfortably on a color one likes”. His designs for complete immersion in color, light, and form are iconic. Panton’s most productive years were the1950s and 1960s. The 1970s Post Modernism was not as suited to his organic, pop form language. But the revival of 1960s chic in the 1990s led to a new increased audience and many of his designs were reintroduced. He died an icon of mid-century modern design in Copenhagen on September 5, 1998.

Vitra, a Swiss family-owned furniture company in Birsfelden, Switzerland, was started and became a success by chance. It was founded by husband and wife Willi and Erika Fehlbaum in 1950 by 1953 they had discovered the work of Charles and Ray Eames and were obsessed. They obtained the license to produce their pieces bringing the Eames furniture to Europe in 1957. They obtained the license and began producing many other mid-century icons of design i.e. alexander Girard, Isamu Noguchi, George Nelson, and Verner Panton. In later years other great names joined Vitra i.e. Jasper  Morrison, Maarten van Severen, and Antonio Cittero to name a few. Their success is extraordinary. Even after a devastating fire in their factory in Weil am Rhein which led to their grand endeavor of the Vitra Campus which houses many outstanding structures designed by iconic designers the likes of Frank Gehry, Zaha Hadid, Tadao Ando, and Alvaro Siza. The Vitra Design Museum by Frank Gehry is an amazing work housing an amazing collection of chairs and other furniture and serves as an independent foundation dedicated to the research and popularization of design and architecture. They have also salvaged and moved to their campus historic structures such as the Dome and a petrol station design by Jean Prouve from 1953. The campus is now also the home to the flagship store Vitra Home Collection and the Vitra Slide Tower. Successful to be sure.

What an awesome iconic chair to add to your collection and your home. You must make it yours.

Handsome signed Verner Panton Chair Classic molded S Chair with the standard glass black lacquer finish by Vitra. It is in wonderful vintage condition. There are a few signs of age and use: a scrape on the inside back, scuff marks on the top rim of the back, and several small nicks in the black lacquer showing the white structural foam. Please see photos. This example is circa late 20th century.