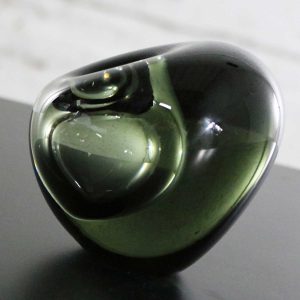 Wow! This is an awesome piece of Danish art glass. It is signed Holmegaard by Per Lutken with his PL signature and dated 1957. Which happens to be the first year this vase was made according to the Harder Net Danish Glassworks Resource Museum. Also, according to this source, it is called the Hulsten, Krukkesten vase. Krukkesten translated means jar stone. Which is just what this beautiful piece resembles a stone made of glass that is hollow. Its gorgeous asymmetric undulating shape will look fabulous on display alone or with your collection. And, its handsome smoke gray color will go with any décor.

Per Lutken best known for his glass designs began his career with Holmegaard in 1942 and remained there until his death in 1998. Many of his more than 300 series and 3000 designs have become Swedish glass classics. When he began at Holmegaard he had no previous glass experience but grew to be considered one of the foremost glass blowing experts in the world. He was known for being a perfectionist and for telling the glass blowers who might complain about his designs being too difficult…. “Well, who said things were supposed to be easy?” This perfectionism is but one of the reasons why his designs were successful and sought out in the 20th century and remain sought after by collectors in the 21st.

The history of Holmegaard Glassworks is as interesting and unique as their beautiful glass. It all began when permission was eventually granted by the King of Denmark to Count Christian Danneskiold-Samsoe to build a glass factory. The Count’s request was prompted by the King’s decision to tax imported glass. Unfortunately, permission came too late for the Count by coming two years after his death. But it did not come too late for his forward thinking and ahead of her times widow, Countess Henriette Danneskiold-Samsoe. So, in 1825 Henriette built and began running a glass factory in the bogs of Holmegaard. The bogs were full of peat which could provide the fuel needed to supply the extreme heat required to blow glass. The Countess knew nothing of glass making, which was a running theme through Holmegaard history so stay tuned. But she ignited a fire which became successful and profitable business in her 18 years as its leader and which extended for the next 100 years when an artistic and design revolution hit Holmegaard in the person of their newest leader, Jacob E. Bang. Bang, like Henriette, knew nothing about glass production. But under his supervision the company stormed the Scandinavian glass design world from 1925 till his retirement in 1942. Next came Per Lutken to the helm, who, following suit knew nothing about glass in the beginning but may have become the most successful and prolific leader to date. He remained till his death in 1998. In the 1960s none other than Jacob Bang’s son, Michael Bang, joined Per to lead the company during their most successful decades. Bang, Lutken, and Bang according to some sources are deemed the creative trinity that brought Danish glass design to the world. Lesia Zuk joined Holmegaard in 2008, and you got it, with no glass making knowledge. She helped keep Holmegaard afloat until they were purchased by Rosendahl, a Danish design company, who owns and runs them today.

This handsome and wonderful piece of Danish glass is modern and classic at the same time and full of interesting history. You need to make it yours

Beautiful Scandinavian Mid-Century Modern off-set vase by Per Lutken for Holmegaard Glassworks. This piece is in the smoke gray coloration and is called the Hulsten or Krukkesten vase. It is in wonderful vintage condition with no chips, cracks, or chiggers. There are scuffs and scratches on the bottom as you would expect with age. It is signed and dated 1957.