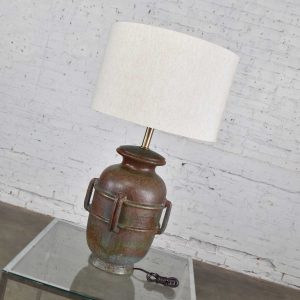 I knew this lamp was incredible when I first saw it, but it was not until it was getting rewired, and we removed the felt on the bottom, that we saw the Raymor Italy mark. It is very blurry but because we know what it is supposed to look like we could read the Raymor and the Italy. Unfortunately, we cannot quite read the number but believe it is, and have seen others, attributed to the famed Italian potter Alvino Bagni. The lamp features a four handled urn form with a mottled lava-like glaze in a mixture of colors (I can see browns and rusts and blue greens) but with an overall earthy green coloration. It has a brass shaft and new socket plus we have added a new linen-like drum shade. This is a perfect lamp for many design styles from mid-century modern to rustic and from loft style to modern country.

Alvino Bagni, 1919-2009, was born in Lastra a Signa, Italy. He lived and worked there all his life. He received formal training in art at the Accademia di Belle Arti in Florence. Major influencers in his work were sculptor, Torello Santini, and Ginori model-maker and decorator, Arnoldo Pugi. It was Pugi who urged Bagni and gave him financial support to open his own workshop. He received an order that set him on a successful path when in 1952 he received a commission from the Dwight D. Eisenhower Presidential Campaign to create 3,500 plates with the inscription “I like Ike”! In the late 1950s he caught the attention of importers Raymor, Rosenthal-Netter, and others. Bagni created a new studio, factory, and research center in 1962 and brought into the realm new talent and creativity the likes of Remo Buti, Enzo Borgini, and Michaelangelo Santonocito. By the 1970s he was employing more than 110 and in 1974 created his famous “Sea Garden” glaze. Unfortunately, in 1992 with stiff competition from a global market he was forced to close his doors. Happily, two years later, at the age of 74, Bagni opened a new studio, Nuove Forme. This company is now lead by his grandson.

*much of the above information was gleaned from Walter Del Pellegrino, author of “Italian Pottery Marks from Cantagallil to Fornasetti”.

We have totally fallen in love with this amazing mid-century modern Italian table lamp and Alvino Bagni. We know you have too. It will be lovely wherever you decide to use it. Just make it yours!