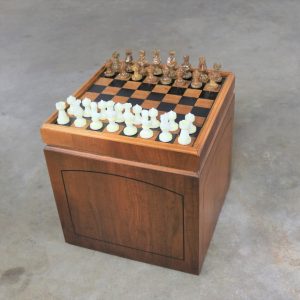 I think this is one of those pieces you didn’t know you needed till you have it. And then you wonder what you ever did without it! Made on September 24, 1966 by Lane Furniture of Alta Vista, Virginia. It is style number 997 87, a rolling storage cube that can be an ottoman and/or stool. Or, flip over the lid (seat) of the cube and it becomes a checkerboard or chessboard. Plus, there is a set of alabaster chess pieces inside. An all-in-one everything-you-ever-wanted magnificent piece of mid-century modern design wonderment! And, it is fun and full of fabulous style!

Lane was founded in 1912 by Edward Hudson Lane at the age of 21, upon his father’s suggestion after he, John Edward Lane, bought a small packing-box plant in Altavista, Virginia. Edward procured a loan and converted the factory to make cedar chests and named it The Standard Red Cedar Chest Co. Sales were good and the company expanded. But during WWI, with the banning of rail freight deemed non-essential, they began making pine ammunition boxes. This is notable as it led to an assembly line which was revolutionary and became the first moving conveyor assembly system in the furniture industry. After the war with sales still increasing Ed Lane decided he could risk giving the company his name and changed it to The Lane Co. in 1922. They began advertising and an ambitious program of research and development leading to hiring their first staff designer and sales force. They made it through the depression with a lot of hard work and again during WWII converted to providing items needed for wartime. After WWII a complete design department was added. They were innovative creating new materials. One called Lanewood which was produced from waste wood. 1951 brought the making of occasional tables. Then in 1956 the acquisitions began of other companies to add case goods and upholstered furnishings. With production of their mid-century-modern furnishings, the company continued to grow and expand until in 1987 it was acquired by Interco, Inc. But, for 75 years the Lane family of Altavista, Virginia ran the business with Edwards son, Bernard Bell (B.B.) Lane, being at the helm at the end. Lane is still to this day a leading U. S. furniture manufacturer.

I can see you using this amazing table/stool in a myriad of places. You must make it yours.

Awesome mid-century modern Lane rolling cube storage ottoman with an upholstered flip top that becomes a checkerboard game table top. It even has alabaster chess pieces stored inside. It is in wonderful original vintage condition with no outstanding flaws that we have observed. Please see photos. Circa September 24, 1966.