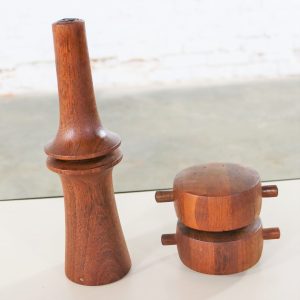 These gorgeous pepper mills look more like sculpture than utilitarian pieces. And how great is that? You can leave them out on display instead of hiding them away in the cabinets! Both are teak and designed by Jens Quistgaard for Dansk Designs. And, both have the Peugeot Lion grinder which I am told is the top of the line where grinding blades are concerned.

Jens Harald Quistgaard was an outstanding and prolific designer. Born April 23, 1919 and raised in Copenhagen he showed his talent early creating a workshop in his mother’s kitchen. He was trained in sculpture by his father, Harald Quistgaard, but furthered his artistic education at the technical school in Copenhagen. He designed for many different companies early in his career, but his big break came when he met Martha and Ted Nierenberg the founders of Dansk Designs. Jens helped them to create Dansk and became their primary and chief designer. He remained in that position designing hundreds of items and even the Nierenberg’s home until the early 1980s when he moved to Rome. He returned to Denmark around 1992 a renowned and award-winning designer continuing to work until just prior to his death in 2008

Dansk Designs, contrary to popular belief, is an American company not Danish. Founded in 1954 by Martha and Ted Nierenberg who traveled to Europe in search of new products to bring to the U.S. post war audience who were ready for a change from the formal lives they had been living and ready to embrace a more modern and simple way. The Scandinavian Modern Designs fit that bill perfectly. And the Nierenbergs engaged Jens Harald Quistgaard to help them accomplish this task. And….that they did. It’s been said that Ted and Jens made one good industrial designer. Jens with his beautiful designs and Ted with knowing how they had to be made to be affordable. Dansk Designs was purchased in 1985 by Dansk Acquisition Corp initiated by Goldman Sachs. Then in 1991 it was purchased by Brown-Forman Corporation’s Lenox division. 2009 brought the most recent change when it was all purchased and renamed Lenox Corporation. Currently Dansk operates as a brand of Lenox and still makes beautiful wares. But it is its vintage pieces which are most sought after today.

We have priced them separately so you may purchase just one. But I don’t know how you would choose. I think you should have both. Make them yours!