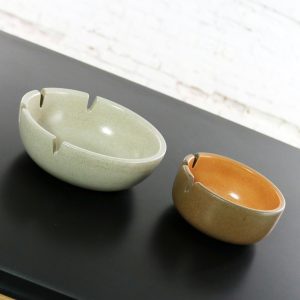 The ceramics and ceramic designs of Edith Heath are phenomenal. Thus, this unmatched pair of ashtrays leaves nothing to be desired. They are both simplistic bowl designs with deep V’s for holding the items for smoking. One is larger than the other with curved sides and in a light grey or oatmeal color gorgeous glaze of which Edith was a genius. This color is called Sand and was used through the 1970s. The other is smaller with flattened sides and in a sandalwood glaze on its outside and terracotta color glaze inside. This coloration was called Pumpkin and it too was used through the 1970s. According to my correspondence with Heath Ceramics, these two forms, and ashtrays in general, were produced from 1948 through 2003. However, the logo stamp on the bottom of this pair dates them to 1950-1953. Thanks to Heath Ceramics for keeping such great records and being open to collectors researching vintage items. And, although made as ashtrays, this pair could also serve as beautiful trinket or key bowls. Or, use them to hold your favorite incense.

Heath Ceramics was founded by Edith Heath (1911-2005) and Brian Heath (1913-2001) in 1944. They had met in 1938 while both were working at a summer camp in Batavia, Illinois. Brian as the director and Edith as the Art Teacher. They were soon after married and moved to Chicago where Edith attended Chicago Teacher’s College and the Chicago Art institute. They then relocated to San Francisco in 1941 where Edith again furthered her art education by attending San Francisco Art Institute and UC Berkeley. Edith naturally was the designer while Brian controlled the business. They began producing their successful and renowned stoneware line in 1952 in their Sausalito factory. Later in the 1950s they began making their award-winning architectural tiles. After Brian’s death Edith continued to work until the sale of the business in 2003. Their Heath Ceramics are collected and sought after today with Edith’s studio pieces bringing the highest prices, although most are in museum collections. The business still thrives under new ownership remaining faithful to Edith’s artistic vision. They are one of the only mid-century California potteries still in existence.

These ashtrays are beautiful examples of mid-century modern ceramics at their finest. You need to make them yours.

Handsome mid-century modern pair of ashtrays by Edith Heath for Heath Ceramics. They are both in fabulous vintage condition with no chips, cracks, or chiggers. Please see photos. Circa 1950-1953.