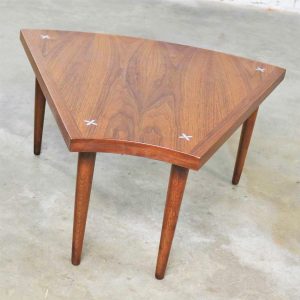 X definitely marks the spot with this fabulous end table! It is attributed to Merton Gershun as its designer and produced by American of Martinsville at the height of their glory during the mid-20th century. Not only is the wedge shape unique on this occasional table, but the signature aluminum X’s placed at its four corners put it in the awesome category. In addition to the pie-shape of the top it has a concave curved front, or narrow end of the wedge, and a convex curve at its back, or wide end. This shape makes it the perfect table to place between a pair of chairs for conversation or the corner of a not quite 90-degree sectional. The flame pattern of its gorgeous walnut veneer is nothing short of magnificent. All of this is supported by great slender round tapered legs. Making the totality simply stunning!

Not much was available online about Merton Gershun but his designs for American of Martinsville are incredible and speak to his talent as a furniture designer. He was born August 7, 1909 and passed on January 3, 1989. Although not as currently well-known as other mid-century modern designers, I feel his time is coming.

American of Martinsville was established in 1906 in Martinsville, Virginia by tobacco manufacturers, Ancil Witten and Charles Keesee. Early on they produced only bedroom furniture. In the 1920s they expanded their production to include dining room furniture and by the end of the 1950s was vast in their offerings in purpose and style. With the expansion of travel and roadside motels, they began offering a mass-produced line for the many motels popping up across the country and continued this through the end of the 20th century. In 2000 they were acquired by La-Z-Boy Incorporated and today specialize in furniture for the hotel and healthcare industries.

We love this handsome and unique side table and know you will too. Make it yours!

Handsome wedge or pie shape end, side, or occasional table in walnut with inlaid aluminum X’s attributed to Merton Gershun for American of Martinsville. It is in wonderful vintage condition. The top has been restored and is beautiful, but it still shows signs of age and use. Please see photos. Circa mid-20th century.