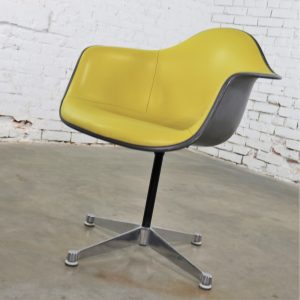 Looking for a bright, bold, and beautiful iconic accent chair? You have found it. This arm shell chair is one of the most sought-after designs by Charles and Ray Eames. Developed in 1952 and released to the market in 1953, the Eames PAC, which stands for Pivoting Armchair on Cast Base, chair along with the PACC chair were a first attempt using the fiberglass plastic series at an office and desk chair. This example has the molded into the fiberglass Herman Miller trademark along with the C and star marking denoting it was produced in the Cincinnati Milacron factory from 1965 to 1978. It is comprised of a gray fiberglass armed shell which is padded with a bright yellow Naugahyde and is supported by a black pedestal and polished cast aluminum four prong star base. You can’t go wrong with this fabulous chair no matter your style or its placement.

Charles Eames was born in St. Louis, Missouri in 1907. Ray Kaiser Eames was born in Sacramento, California in 1912. They met at Cranbrook Academy of Art in Michigan and were married in 1941. They moved together to California and continued their design work they began together at Cranbrook. A commission, which they acquired from the government during WWII to produce molded plywood splints and stretchers, launched a career producing iconic mid-century modern furnishings which are still fresh and sought after today. The Eames and their association with Herman Miller were the partnership of the century. If you want to learn more about Charles and Ray please visit Eames Office, the Eames Official website.

Herman Miller started life as Star furniture Co. in Zeeland, Michigan in 1905 a producer of high-quality furniture. Becoming Michigan Star Furniture Co in 1919, and then in 1923, when long time employee Dirk Jan De Pree and his father-in-law purchased 51% of the company stock, it was renamed Herman Miller Furniture Company. And remained so until the 1960s when it became Herman Miller, Inc. Until the 1930s they produced only traditional wood furniture, but the Great Depression caused a need for change and they hired modernist Gilbert Rohde who took the company in a new successful direction. Upon Rohde’s death in 1944 he was replaced by none other than the renowned George Nelson. Working with the likes of not only Charles and Ray Eames but Isamu Noguchi, Alexander Girard, and Robert Propst, to name just a few, Nelson lead Herman Miller to became one of the finest names in furniture and design.

Do not hesitate. Make this icon of design yours.

Iconic vintage Eames PAC, pivoting armchair on cast aluminum base, with yellow Naugahyde padded swivel seat on gray fiberglass shell. It is in wonderful vintage condition. The cast aluminum four prong base is finely polished and the yellow Naugahyde is great apart from three small flaws that have been repaired. Please see photos. Circa 1965-1978.