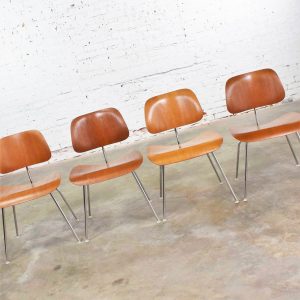 Beautiful. Iconic. Classic. Comfortable. Versatile. Durable. All adjectives to describe this fabulous set of four DCM, Dining (height) Chair Metal (base), or Potato Chip, as they are sometimes called, dining chairs. This chair was designed by the celebrated design team of husband and wife Charles and Ray Eames and first produced in 1946. However, the beginnings for this chair design began in the 1940s when the Eames were working with the government on molded plywood leg splints during WWII. It was first produced by Evans Manufacturing but early in the 1950s Herman Miller purchased Evans and began production themselves. This set is comprised of a zinc rod base with white nylon feet, indicative of the 4th generation production circa 1960s-1980s, and the classic potato chip shaped molded plywood seats and backs with walnut veneer. They are not perfect but have a wonderful warm age patina that we feel is fabulous. We like the story they tell. These are obviously an incredible choice for a mid-century modern dining table but look magnificent in any design aesthetic.

Charles Eames was born in St. Louis, Missouri in 1907. Ray Kaiser Eames was born in Sacramento, California in 1912. They met at Cranbrook Academy of Art in Michigan and were married in 1941. They moved together to California and continued their design work they began together at Cranbrook. A commission, which they acquired from the government during WWII to produce molded plywood splints and stretchers, launched a career producing iconic mid-century modern furnishings which are still fresh and sought after today. The Eames and their association with Herman Miller were the partnership of the century. If you want to learn more about Charles and Ray please visit Eames Office, the Eames Official website.

Herman Miller started life as Star furniture Co. in Zeeland, Michigan in 1905 a producer of high-quality furniture. Becoming Michigan Star Furniture Co in 1919, and then in 1923, when long time employee Dirk Jan De Pree and his father-in-law purchased 51% of the company stock, it was renamed Herman Miller Furniture Company. And remained so until the 1960s when it became Herman Miller, Inc. Until the 1930s they produced only traditional wood furniture, but the Great Depression caused a need for change and they hired modernist Gilbert Rohde who took the company in a new successful direction. Upon Rohde’s death in 1944 he was replaced by none other than the renowned George Nelson. Working with the likes of not only Charles and Ray Eames but Isamu Noguchi, Alexander Girard, and Robert Propst, to name just a few, Nelson lead Herman Miller to became one of the finest names in furniture and design.

If you are looking for classic mid-century modern…you have found it. Make this set of four DCMs yours!

Handsome set of 4 vintage mid-century modern Eames DCM, Dining Chair Metal, dining chairs for Herman Miller with silver colored bases, white nylon feet, and walnut veneer. They are in overall wonderful vintage condition. There are some small flaws as you would expect with age and use. We have not refinished these chairs. You will find a few dents and chips on chair seat edges and small scratches to the tops of seat veneer. To me they have a beautiful age patina but if you like perfect…they are not. It appears one chairs’ seat has had the grommets replaced. Please see photos. Circa 1960s-1980s.